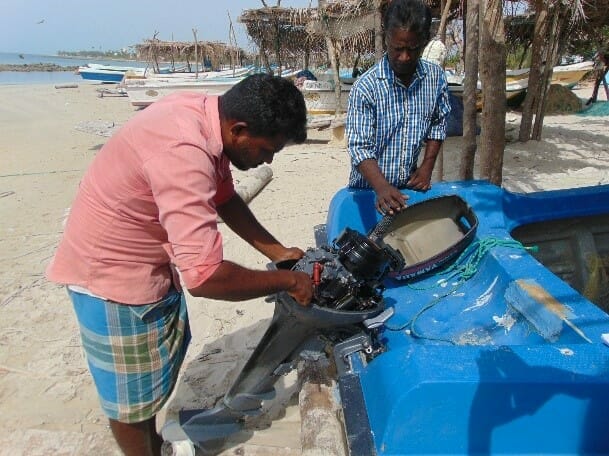 Pias Sandrakumar, a 26-year-old fisherman from the resettled village of Ilawalai North West in Jaffna in the conflict-affected North of Sri Lanka, used to worry when he would take his boat out in case of technical problems. Now, however, he is able to go out to sea for fishing with less worry now that he has better knowledge of engine repairs. Through the USAID-funded Social Cohesion and Reconciliation (SCORE) program, Global Communities is working with the Government of Sri Lanka and local civil society organizations to address underlying challenges to reconciliation. The program works by promoting a shared and inclusive Sri Lankan identity, reducing socio-economic disparities, and strengthening cohesion and resilience among multi-ethnic and multi-religious communities.

Tamils from this area had been living in camps for internally displaced persons (IDP) since 1990 due to war and resettled only in 2011. They then resumed the only livelihood they knew of and entire families in this area depend on the fisheries sector. Still a young family, Pias is a father of one. His wife, a daughter of a fisherman, knows too well the risks of a fisherman’s life, especially when troubles come while at sea. So when her husband was one of 15 young people to receive a three-day training on outboard engine repairs with USAID SCORE’s intervention through its implementing partner – the Rural Development Foundation (RDF) – she was extremely relieved. Not only are the chances for tragedies at sea now significantly less, but the training also provides a likely  boost to their income.
Following the training, Pias can now handle repairs to his engine on his own. He does not have to rely on a repair technician and part with his hard-earned money from his meager income, which averages around $6 USD a day. And previously, he had to give up fishing for the day to come back to shore with the help of another fisherman to tow his boat, resulting in the loss of a day’s income for both fishermen, which could exceed $170 during the high season. “Of course, this kind of income is rare,” he said with a smile. “Not knowing how to repair your boat engine is definitely a risk, especially if you are unable to contact nearby fishermen. Some fishermen are still missing. We think that they may have had engine failures and were unable to contact us, and drifted away.”

The outboard engine training for youth fishermen came about when the Ilawalai North West Coexistence Society, set up by the Ministry of National Integration and reactivated by SCORE, together with the Sendamkulam Fisheries Society identified the needs of the area’s fishermen. SCORE, through the RDF, provided the training from the Ocean University of Sri Lanka, a welcome change since for so long, governments past and present focused on supporting paddy cultivations in the region, rather than fishing. So when the SCORE-supported training was offered, neglected fishermen like Pias seized the opportunity with great enthusiasm.

“It was a valuable training,” he said. “I hope that we could receive training on boat repairs as well. Because when a hole appears in the boat’s fiber, we do not know how to repair it and it costs us a lot of money.
Trained fishermen like Pias are now empowered to repair the equipment they work with. This SCORE activity has advanced their livelihoods and made it safer for them to go out to sea. SCORE has thus helped reduce socio-economic disparities in the region by supporting this excluded community and providing a valuable service for them.